The Department of Health declared a national dengue epidemic in the Philippines last August 6, 2019 due to significant increase in dengue cases, with other provinces declaring state of calamities following the outbreak [1, 2, 3]. In line with this, the National Integrated Fisheries Technology Development Center – Bureau of Fisheries and Aquatic Resources (NIFTDC-BFAR) released around 6,000 mosquito fish (Gambusia affinis) in Dagupan City, Pangasinan, as part of the prevention measures of the city against dengue [4, 5].

Locally known as kataba and introduced to the Philippines during the American colonial times, Gambusia affinis is known to be highly predatory for mosquitoes [6]. However, it is also considered by the Global Invasive Species Database (GISD) of the International Union for Conservation of Nature (IUCN) as an invasive species – one that eats the eggs of economically desirable fish and preys on and endangers indigenous fish and invertebrate species in the area [7].

The Philippine Society for Freshwater Science (PSFS), a professional association whose members are from the academe, research institutions, environmental organizations, government agencies, and civil society engaged in the promotion of scientific knowledge and stimulation of scientific investigation for the advancement of freshwater science in the Philippines, denounces the action of NIFTDC-BFAR in resolving the dengue outbreak in the country using Gambusia affinis. Introducing G. affinis compromises our aquatic ecosystems and can potentially lead to irreversible economic and biodiversity loss in the country. The same mindset has led to the uncontrolled proliferation of knifefish (Chitala ornata) and janitor fish (Pterigoplichthys spp.) in many parts of the country.

As early as the 1970s, Gambussia affinis was already recognized to cause ecosystem alteration by predation on non-target groups such as rotifers, crustaceans, eggs of native fish, and other insect populations [8, 9, 10]. If this fish finds its way into our natural waters (lakes and rivers), it may end up displacing most of our native fauna. Moreover, experimental investigations also revealed that G. affinis decreased zooplankton species populations such as Daphnia pulex, Ceriodaphnia sp. and Diaptomus pallidus [11]. We have Ceriodaphnia spp. (Ceriodaphnia cornuta and Ceriodaphnia pulchella; Mamaril, 2001) in our lakes which serve as food for other predatory zooplankters as well as fish. The presence of the invasive G. affinis may potentially alter the zooplankton species populations in our freshwater ecosystems, thereby leading to further economic and biodiversity loss in the country.

We demand that the NIFTDC-BFAR review its policies and implement research-based and ecologically sound solutions, including the cessation of the distribution of Gambusia affinis to other provinces [12]. Furthermore, we call on the top administration of the Bureau to come up with a unified stand on the issue which considers scientifically-proven, ecologically sound and environmentally-safe intervention measures. The BFAR has, among its ranks, several scientists who should have been consulted prior to the release of the mosquito fish. These scientists would have shared our sentiments regarding the negative impacts of using invasive species such as G. affinis.

We are also now seeing how such irresponsible actions have even led other individuals to seek equally ill-advised alternatives, such as the introduction of the cane toad, Rhinella marina, another invasive species [14, 15]. Invasive species will never be a viable solution to the control of dengue outbreak, and may, in the end, do more harm than good to our environment.

Several measures have been recommended in the past to combat dengue outbreaks including the proper management of sewage systems and materials recovery facilities to prevent breeding grounds of mosquitoes, vaccinations and DOH’s Enhanced 4S Strategy (Search and destroy mosquito-breeding sites, Seek early consultation, Self-protection measures and Say yes to fogging only during outbreaks) [16, 17]. 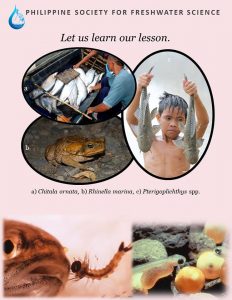